Design And Build A Career

A talented Aberdeen secondary school pupil has won a prestigious local art competition by creating an abstract self-portrait which reveals his career ambitions.

The 13 year old was up against other youngsters from schools across Aberdeen city and shire who all rose to the challenge of creating a self-portrait which expresses their career hopes for the future, along with a written narrative which supports their artwork.

Fraser's winning work is a show-stopper, illustrating his dream of becoming an architect and designing a house in Australia.

Fraser explains further, "My submission represents all my dreams because as well as designing and building my own home in Australia I would love to explore Africa in a hot air balloon. To complete my self-portrait I used lots of different types of substances including paint, wood and card. Although it doesn't look like me, it definitely is all about me." 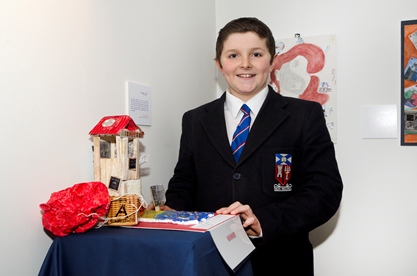 Fraser's work grabbed the attention of a panel of judges from arts, business and education, and is now on display in a very special exhibition at Aberdeen's Tivoli Theatre, accompanied by the top 50 entrants. His teacher, Miss Pollock said "Fraser worked very enthusiastically from the start of the project and has a clear idea of what he wants to do with his career. The class project aimed to create a 'House of Dreams and Ambitions' using collage materials and plenty of imagination! Fraser's idea just kept on developing as we discussed his hopes for the future. His work reflects his positive personality as well indicating what he hopes to achieve. I am delighted that he has won this great competition."

Fraser has also won two flights to London, donated by British Airways as part of his prize.

"My Future Aspirations" is in its sixth year and since it was launched by Thorpe Molloy Recruitment it has attracted over a thousand self-portraits from pupils across the area.

It not only allows S1 and S2 pupils to display their artistic talents and literary ability, but also encourages them to think about what they want from their futures.

Head Judge, Karen Molloy, remains as passionate about the initiative as she was when the competition was first launched, "I think what is really important about the competition is its relevance, that it is fun, and that it stimulates thoughts and discussions around future careers before the school pupils have to make their subject choices. With a focus on careers it also complements our core business activity of recruitment. Judging the competition is truly one of the highlights of my working year, I feel inspired by the effort and talent of the youngsters and confident that the future will be in safe hands."

Karen continued "Our competition dispels the myth that young people have no ambition and that celebrity is their most popular career choice. They actually dream of achieving successful challenging careers which contribute to society."

In addition to the judge's winner, members of the public also voted for their favourite via social media in The People's Choice. This year's winner is Anastasia Grigas from the British School of Houston who aspires to be a human rights lawyer. 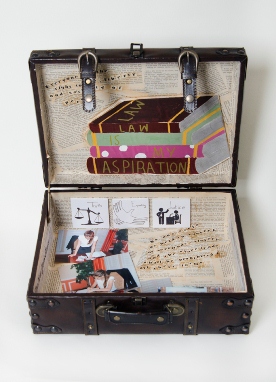 Aberdeen Cyrenians is enjoying a cash boost of over a thousand pounds thanks to an innovative Christmas quiz by Thorpe...

All Rapped Up For Christmas

Forming the final chapter in our Festive Fun trilogy we rap our hearts out (sort of) to wish you all a very Merry...